His name is John Disterdick, and his reign in the Masters Boxing Division began in 2007. Eight years later, he’s hanging up the gloves, having won more boxing title belts than Floyd Mayweather Jr. and Manny Pacquiao put together. His success came from hard work and determination. Though he’s retiring from the competition in the ring, it’s only one chapter in this champion’s book of life.

He stands 6 foot 3 inches tall and weighs in at a hundred and ninety-eight pounds. His fights are often nonstop, toe-to-toe, actioned-packed bouts that result in standing ovations from the crowd. A fan favorite, kids rush to ringside when he steps into the ring.

His name is John Disterdick, and his pugilistic journey began when he was in the 82nd Airborne Division where he trained with a sergeant: an ex-professional fighter.

“Knowing I would be deployed, I wanted to be as prepared as possible for whatever situation I found myself in, possibly being hand-to-hand issues,” said John.

When he left the military, John returned to California where he worked as an actor. He worked mainly in TV commercials, but also in some TV series and big screen productions. It was at one of these productions that John met a stuntman named Sonny Shield, father of Randy Shield, the fourth-ranked welterweight at the time.

John remembers vividly, “I trained with Randy for about 6 years until he hit so hard I relinquished my role as a sparring partner. For years thereafter my only boxing was occasionally hitting the heavy bag at the gym”. 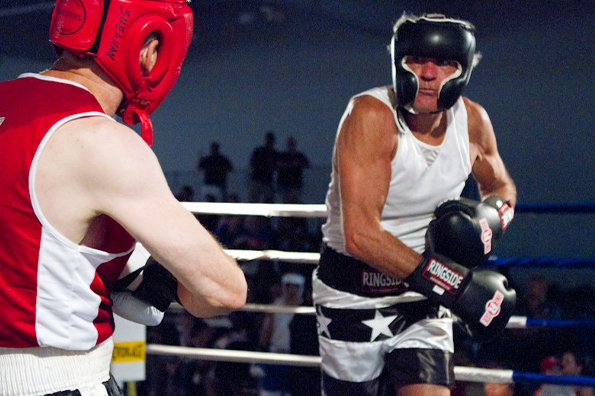 Though he wasn’t boxing anymore, John continued to compete in athletics while making his new home in Chattanooga Tennessee. He stayed active in sports such as swimming, rowing, cycling, and triathlons, just to name a few. One of John’s goals was to win the yearly Master Athlete Award presented by Geezer Magazine. This award went to the stand out amateur athlete age 50 and older, and John felt he had a good chance at winning it.

“My approach for the Master Athlete Title was not in any one sport but that I could perform decently in numerous sports. I was competing in the Senior Olympics in swimming (6 events), Track & Field (9 events), Cycling (2 events), Rowing, Slalom Skiing, and Triathlons.”

During his pursuit of the Master Athlete of the Year Award, John noticed that the previous winner was a master boxer in his 60’s by the name of Paul Soucy from Michigan. Paul Soucy was the cover story of the 2006 Geezer Magazine. Paul’s experience competing at the 2006 Ringside World Championships, which included a masters’ division, was the highlight of the article. Motivation set in; John was determined to compete in 2007 as a master boxer.

After completing his paperwork and getting cleared as fit to box by his doctor, John began his boxing training in preparation for his amateur debut as a master boxer. “I hoped to get in the top 3 at the Ringside World Boxing tournament”.

Exceeding his expectations, John fought for the title and won, defeating tough John Cruz at 178lbs. This was the first of 10 titles John won at The Ringside tournaments. His collection of 10 championship belts includes 9 from Ringside and 1 from The Title tournament in Atlanta. To this day, he holds the record for most championship belts won by a master boxer. A 7-year reign and an undefeated record make John Disterdick arguably the best master boxer to compete in the division.

He dominated his weight classes from 178lbs to 198lbs and feels now is the time to hang up the gloves. What kept him motivated to compete for 7 years?

“Mainly it was the relationships and enjoyment of seeing the individuals again. Robert Ray and his wife Laura have been a great blessing for me and my corner man and friend Jack Godwin. Jack and I trained together and he also went to Ringside a number of years with me.”

Looking back at his achievements in the ring, he credits his conditioning as the key to his success. His fighting style of applying constant pressure often tired and overwhelmed his opponents. Training on the Concept 2 rowing machine, running and lots of sparring prepared him for 3 tough rounds of boxing.

“I had several great sparring partners (Jesse Peterson and Dale Dagnan) that worked me to the point of complete exhaustion, which is what I believe you need to do several months before the event and at least 3 times a week. Sparring prepares you for the unknown and unexpected facets of the bout.

I don’t understand anyone who goes to Ringside World Title Tournament without extensive sparring. I had a number of great sparring partners that are much more talented than myself who pushed me to the end of my rope. I believe the sparring partners should be different weights, heights, ages and styles (southpaw) to help prepare yourself.”

Success wasn’t easy: the biggest obstacle was time. The challenge was to dedicate the proper amount of time to prepare for a tough bout and still be strong at the end. John thought out scenarios beforehand in order to adjust to any situation he faced.

“I believe any sport, and certainly boxing, takes a great deal of mental preparedness. I thought about how rounds could go and what I would do if certain events happened, like several 8 counts against me. When I entered the ring I was prepared to take whatever came my way and return the shots with a few added. I believe there is always a certain aspect of fear that plays into the situation, but for me, I had mentally prepared myself to give 110%. As a Christian, I often turn to scripture and prayer to help me overcome life’s obstacles.”

Memorable fights with the likes of Robert Ray and Glen Erickson displayed John’s toughness and will to win. Fights that were close, yet his training and conditioning pulled out the win. The challenges he faced made the victories memorable. Other special achievements in sports have been: winning the nationals in speed skating; receiving the most medals in the State Finals for the Senior Olympics (8 Gold, 5 Silver and 1 Bronze); Hawaii Ironman triathlons where he placed 3rd in the Master Division in one, and in 1982 he was the only triathlete to place in the top 3 of all the national events that year (short course, long course, and ultra course). 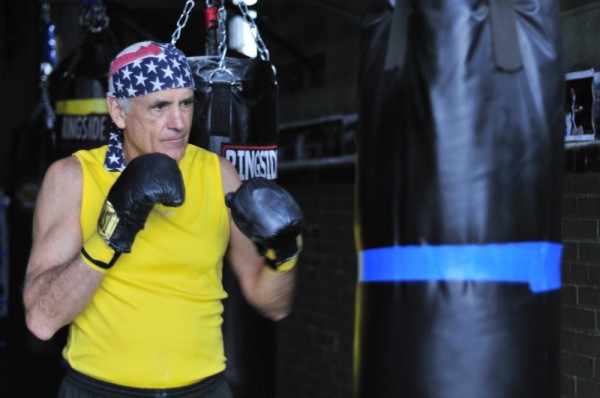 “Those above are memorial events along with a few others but I’ll have to say my 10 World Titles at Ringside being undefeated will stand as my biggest accomplishment in sports. I was inducted into the Chattanooga Sports Hall of Fame several years ago under the Boxing umbrella and appreciate all the benefits boxing has meant to me.”

So what’s next for John? His focus has shifted back to swimming, the sport he competed in for four years at the University of Purdue. He joined a masters swimming team in Chattanooga and will be competing at the National Senior Olympics, which has always conflicted with Ringside.

“It’s like I have gone full circle starting with swimming and coming back. I also plan to do several triathlons including the nationals. I’d like to continue promoting health and fitness and, if possible, motivate others to get involved in some activity to enhance the quality of their lives.”

His advice for master boxers and those looking to compete as master boxers is broken down into three parts. First is to build your skill level with a licensed coach in order to get the valued training you will need to compete at the highest level of masters boxing.
Second is conditioning. He believes the Concept 2 rowing machine is a great piece of equipment to prepare you for boxing bouts, mainly because it works the entire body. Running and sparring should also be included in your training regimen.

The third is the mental aspect of boxing. “It may not seem that important to some, but I believe the mental preparation could often make the difference between victory and defeat. Think through the possible scenarios and how you’ll react, then when one of them happens it won’t take you by surprise and you’ll react as you have mentally planned,” said John.

Though John is hanging up the gloves, he still works with kids at the local boxing gym and works out with some of the local master boxers. Will we ever see John compete as a master boxer again? Never say never, but he is happy with his decision at this point.

“I went out in great style having my last bout with Robert Ray, a great fighter and truly a joy to spend time with him and his lovely wife Laura. The opportunity to meet truly great individuals like Bill Castellucci, Ron Guidry, John Brown, Jack Godwin, Jerry Howell, Jackie Atkins, Kevin from Florida – and there are others I can’t think of at this moment – but of course meeting you Manny has meant a lot to me.”

We thank you, John Disterdick, for all you have meant and done for our wonderful division. We wish you continued success in all your new endeavors. MB